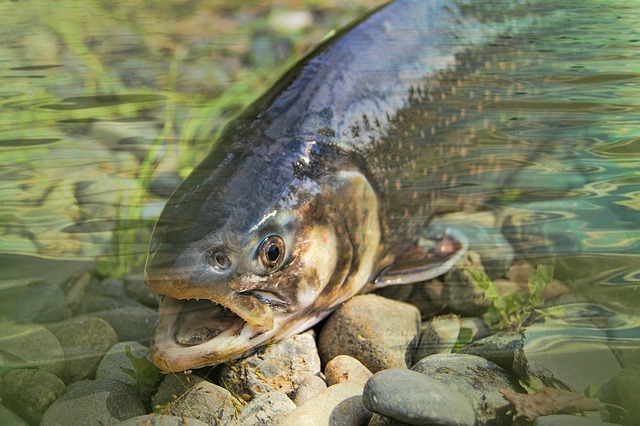 Native Chinook salmon in California have recovered in numbers due to the intervention of state and federal agencies but continue to face a massive threat in the drawn-out drought that has plagued California for the past five years.

The drought has brought California one of its driest periods on record. Federal and state authorities have had to raise salmon in artificial hatcheries and bring them downstream to keep the state’s primary fishing product above dangerous numbers, US News reports.

A different Chinook salmon species, the winter-run salmon, got on the federal list in 2015 as one of the eight US animal species in most danger of near-extinction. Nearly dry rivers and too warm waters all but killed the 2014 and 2015 winter-run Chinook salmons.

Authorities have had to find a balance in managing California’s river waters. Dams block over 90% of the Chinook salmon’s home environments and agencies have had difficulty during the drought in releasing the right amount of water at the right times to provide for the crops and animals in the San Francisco Bay-Delta area.

The salmon grow, mate and die in three-year cycles, making 2014 and 2015 critical years for winter-run salmon. So far, the Chinook salmon have caught a much-needed break as rain and snow from El Nino storms added to the waters of the rivers.

Chinook salmon are a mainstay species in California, bringing in an estimated $1.4 billion in commercial and sport fishing annually.

The salmon also play a prominent role in the overall health of land, ocean and river wildlife as they travel to and from oceans and rivers. They serve as food for orcas, bears, eagles and other predators, and when they die upstream, the fish’s decomposing bodies provide nitrogen that helps forests.

While some farmers and fisherfolk say that using machinery and relying less on river waters is the key to increasing the salmon population, environmentalists point out that creating healthy river conditions is the best chance of helping the fish stay alive.

Government officials are now looking into formally reviewing how key waterways and reservoirs are managed in order for the Chinook salmon to survive.

Carbon Nanotube Transistors Just May Change How Microprocessors Are Made
Good News: Giant Pandas Off The Endangered List
To Top