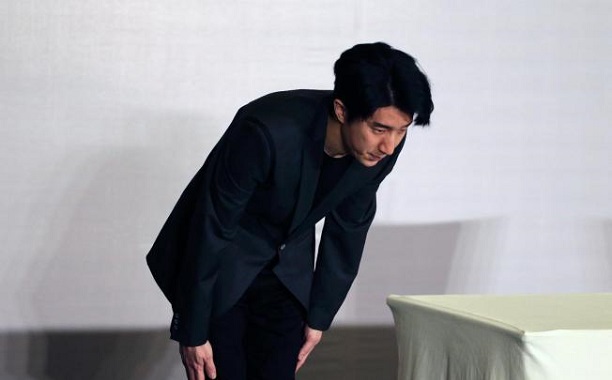 Jackie Chan’s son, Jaycee Chan, issued a public apology on Saturday for his actions which led to his recent six-month incarceration in a Chinese jail. He indicated in his apology that his arrest had “a negative impact on society” and that it disappointed his supporters while causing losses for those who worked with him.

As a public figure, this incident has had a negative impact on society, disappointed people who supported me, and caused losses for people who have worked with me

His Beijing apartment was raided last year and authorities discovered marijuana. He plead guilty to a charge of allowing people to smoke weed in his home and was subsequently sentenced to six-months in jail.

He was released from jail the other day after having served his time. The time he spent incarcerated prior to his sentencing was take into account as time served.

The 32-year-old said at a news conference that he was rededicating his life to his family and career in entertainment. He went on to say that he had “no reason” and “no excuse” for his unlawful behavior which led to his arrest back in August of 2014.

When his home was raided last August, authorities not only found over 100 grams of pot, they also found Taiwanese actor Ko Kai, who was released within a couple of weeks, as opposed to the months served by Jaycee for the more severe crime of allowing people to use drugs in his home. Both tested positive for marijuana.

While Chan was looking at up to three years in jail, the court showed him some leniency in light of his having come clean about his drug use.

At the news conference, he said that he had changed his values and outlook on life.

After this correction by the justice system, I have changed my outlook on life and my values

His news conference was broadcast live on CCTV, a Chinese state broadcaster, which Yahoo News said illustrated the propaganda value China hopes to gain from the high-profile case amid the country’s sweeping crackdown on drugs.

Chan extended a deep bow of apology before and after his public apology.

What are your thoughts on Jaycee Chan’s apology, does he seem sincere?