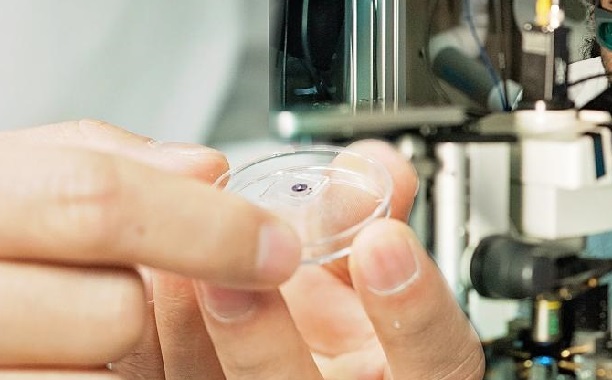 Scientists at the University of Texas El Paso (UTEP) and the University of Central Florida (UCF) have developed a new light bending device which allows for a more effective means through which data can be rapidly transmitted through electronic circuit boards.

The device, which resembles a plastic honeycomb, is infinitely smaller than a bee’s stinger and capable of steering light beams around tighter curves than previously possible. Which it does while retaining the integrity and the intensity of the beam.

Stephen Kuebler, associated professor of chemistry at UCF, was quoted in a public release on EurekAlert as having said that the new technique “has the potential to become a flexible means for manufacturing next generation computer devices”.

The study’s findings, which were published in the journal Optics Express, find immediate electrical engineering significance in the engineers’ necessity to pack ultra-fast data-transmission devices into smaller spaces in light of rapid technological advances in computing and portability, as is exhibited in laptops, smartphones, wearable augmented reality devices such as Google Glass and the like.

Convectional light waveguides such as optical fibers allow light to be steered through turns, however, the turns must be gradual as the light beams escape when the turns are too quick; loss of light equates to loss of energy.

The team’s new plastic devices’ lattice steers beams of light around ultra-sharp turns without losing energy and while this is already a record in itself, the team is presently working on doubling the record through the creation of a lattice which will bend light through even tighter turns.

In other recent supercomputer related coverage here on Immortal News, scientists at Google stabilized quantum bits; solving a quantum computing paradox which has perplexed researchers up until their recent breakthrough.

What are your thoughts on this new UTEP-UCF light bending device?